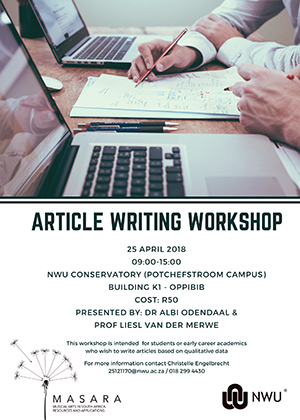 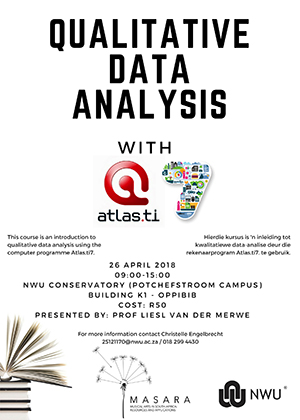 On 28 April 2015 another workshop was presented by Dr Liesl van der Merwe for faculty and graduate students who were ready to analyse their data for their own research. The workshop gave an introduction to the basics of ALTAS.ti such as HU, PD, Quotes, Messages, Memos and basic skills related to codification and Networkviews.

The SAME conference (2015) began each morning with a Dalcroze workshop, which was presented by Bethan Habron-James. The weekend after the conference she offered intensive training from Friday 27 March to Sunday 29 March. These and other Dalcroze workshops stimulated Dalcroze research. The following MASARA members are involved in Dalcroze research: Prof. Hannes Taljaard, Ms Catrien Wentink, Dr Liesl van der Merwe and Dr John Habron.

A second intensive Dalcroze weekend was held from 13 to 15 November 2015. An intensive interview was conducted with Bethan Habron-James as part of Dr Liesl van der Merwe and Dr John Habron's next research project. The Sunday workshop was conducted as part of Ms Catrien Wentink's DMus research.