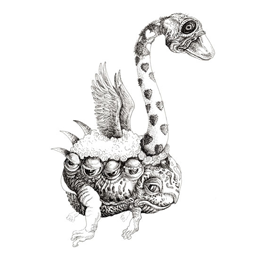 Tracking creative creatures was an interdisciplinary exploration that originated from a need for research possibilities in the creative disciplines, specifically in visual arts and creative writing. The graphic works that formed the core of the project and that served as creative stimuli for the various artists originated in the imagination of a five-year-old boy and were subsequently illustrated by his artist father. The project entailed various components, including a flagship project with invited artists, a teaching subproject and a community subproject, which were showcased at the Aardklop National Arts Festival, 2007. Articles from this project were published in a special edition of the journal Literator (2009, [30]1).